The 89.35-kilometre railway line from Lleida to La Pobla de Segur has its origins in the proposed Trans-Pyrenees line connecting the city of Baeza to Saint Girons in France via Port de Salau. The first section was opened on 3 February 1924, linking Lleida to Balaguer.

Later, after the Civil War had ended, RENFE (the national railway operator) was put in charge of continuing the works; the line reached Cellers in 1949, Tremp in 1950 and, lastly, La Pobla de Segur. It was not until 1951 that the line finally connected La Pobla de Segur to the municipalities of Lleida and Balaguer, as was originally intended.

Control of the section of line between Lleida and La Pobla de Segur was handed over to the Government of Catalonia on 31 December 2004. Restoration work commenced in 2005, and in summer 2007 the line was reopened, this time with a focus on tourism and enabling passengers to enjoy the landscapes from the comfort of the train.

2009 saw the launch of the tourist-oriented “Tren dels Llacs” brand, with regular services operated using historic and panoramic rolling stock. In 2016 a new service model was introduced, with the line being operated entirely by FGC. Two new panoramic trains were acquired and the frequency of services was increased.

The route follows the Lleida-Balaguer railway line along the banks of the River Segre, travelling from Lleida to Balaguer and from the plains up to the Pre-Pyrenees. It is a single-track line that bisects the counties of Segrià, Noguera and Pallars Jussà, passing through 17 stations along the way.

The Tren dels Llacs line starts following the river Segre from Lleida to Balaguer on a single track. Then it continues its journey until it reaches La Pobla de Segur, in the heart of Pallars Jussà.

After leaving the River Segre behind, the train enters the basin of the River Noguera Pallaresa, enabling passengers to admire the magnificent reservoirs and iconic mountain ranges, such as Montsec, before the journey comes to an end in La Pobla de Segur.

In total, the Tren dels Llacs passes through 40 tunnels and crosses 75 bridges over its 89-kilometre route, which takes around two hours to complete. There are two ways to enjoy this magical route: the Historic Train and the Panoramic Train.

Travel back in time with the Historic Train and enjoy an unforgettable, nostalgia-filled journey through spectacular landscapes. This vintage train passes through Lleida and the surrounding region before reaching the iconic lakes of the Pre-Pyrenees, in the heart of nature.

With diesel locomotives 10817 and 10820 pulling carriages that date back to the same period, the Historic Train allows passengers to journey through nature from the comfort of their seats. The diesel locomotives are coupled to four vintage 6000-series carriages that were built in 1968. They were designed to serve a variety of transportation and shunting purposes and were commonly referred to as “ye-yés”.

This tourist train also includes a fascinating period mail carriage and a dining car with a spacious bar and comfortable tables and chairs, from where passengers can admire the scenery. The Historic Train passes through Segrià, Noguera and the iconic mountain range of Montsec before arriving at the heart of Pallars Jussà. A unique experience on a historic train that takes passengers on a spectacular journey alongside rivers and reservoirs. 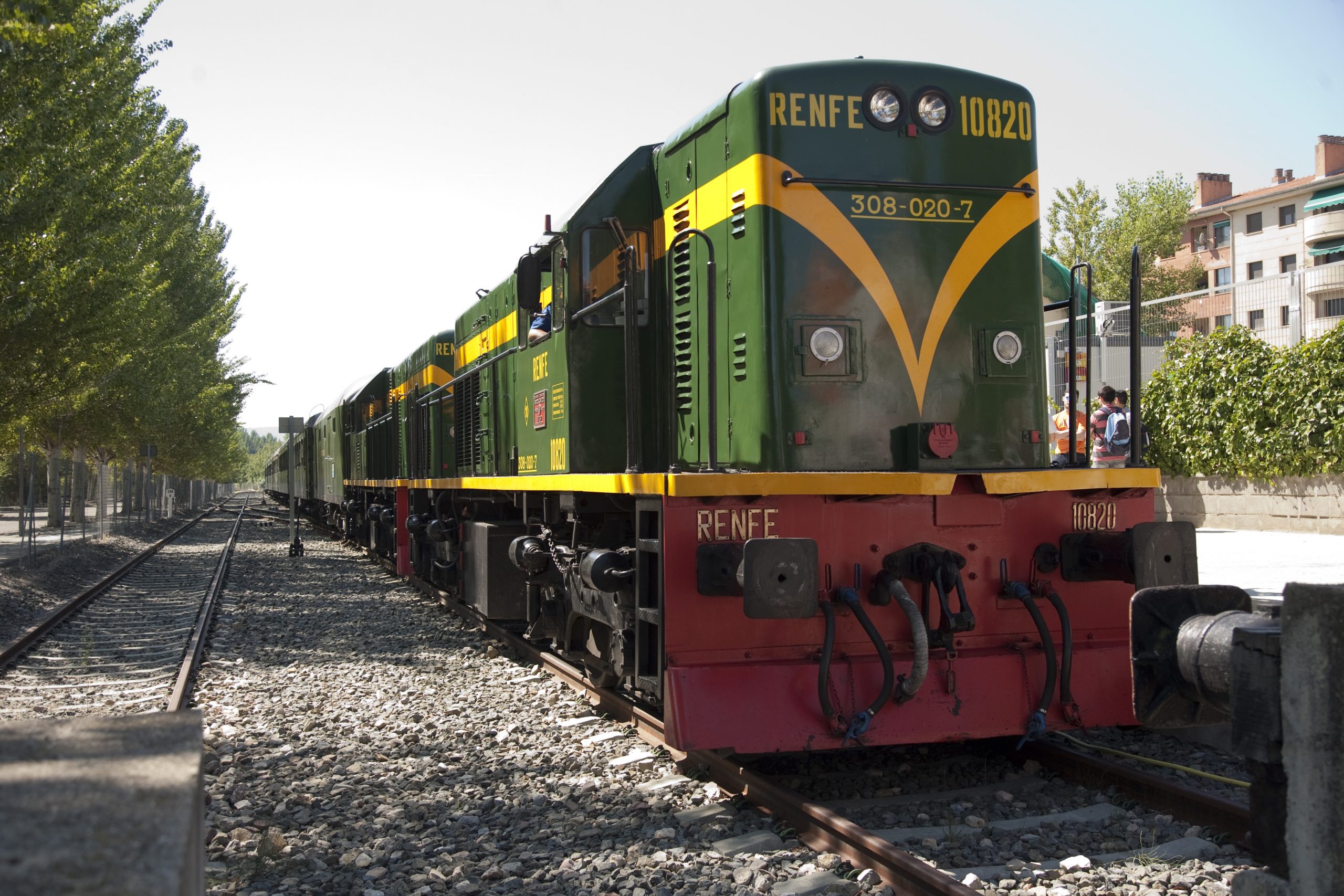 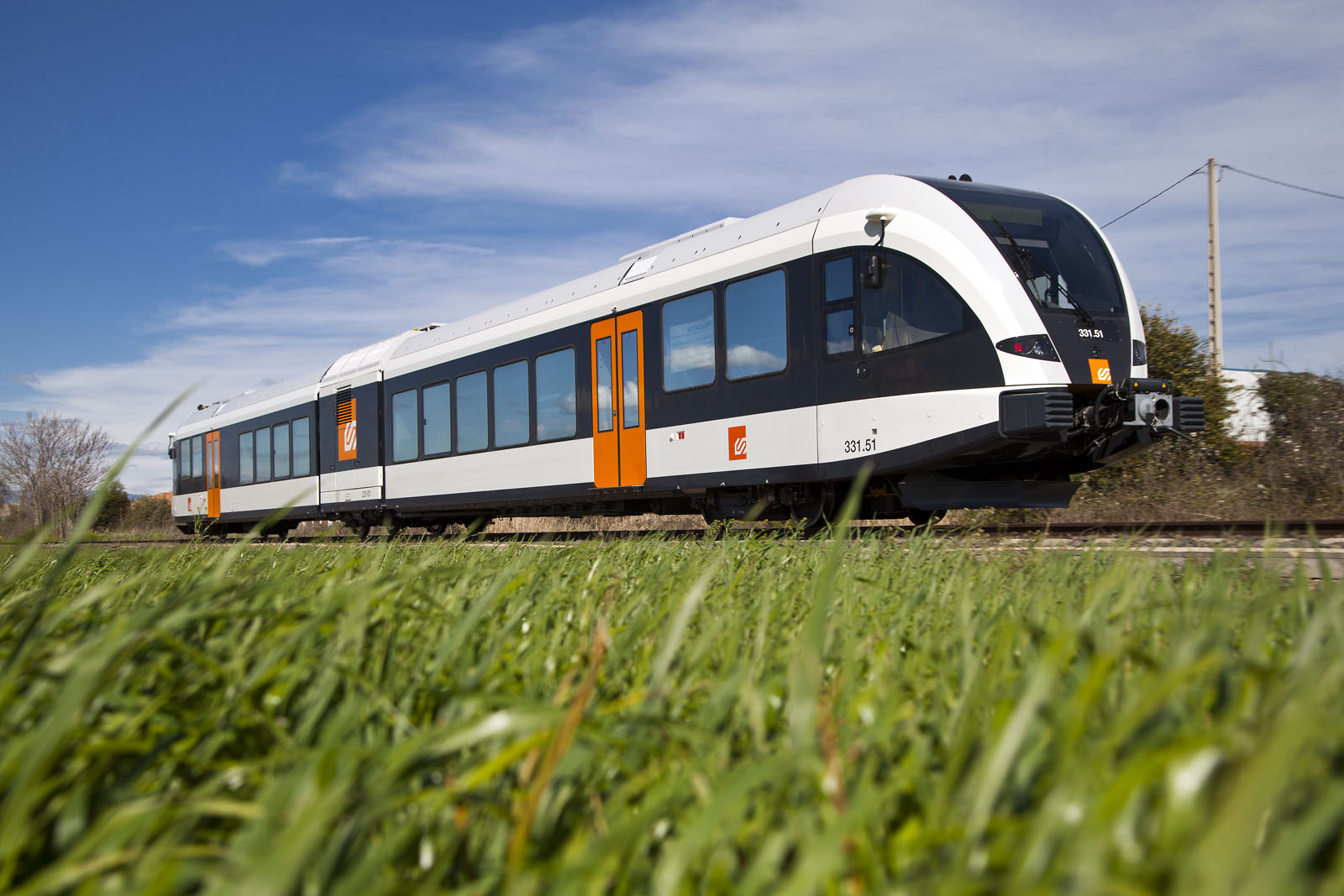 During the middle weeks in summer, passengers are able to travel on the Panoramic Train along the historic railway line from Lleida to La Pobla de Segur. It is an unmissable experience that takes visitors on a unique journey through one of Catalonia’s most stunning natural areas. This photogenic route offers an opportunity to discover the singular landscapes and expansive lakes from the comfort of your seat.

In addition to the airy, open ambience afforded by the panoramic windows of this modern train, passengers will enjoy unparalleled views of the Monroig and Montsec mountains, as well as the large, placid lakes and reservoirs.

The GTW 331-series Panoramic Trains offer great comfort and full accessibility, as well as spaces reserved for people with reduced mobility, areas for bicycles, and plug sockets for passenger use. Additionally, passengers receive regular updates regarding stations and other information via public address systems and intercoms. The train has 90 seats, shared between two climate-controlled carriages.

Go to the full gallery

See all the experiences

How to get there?